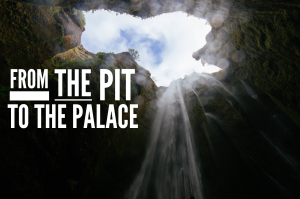 Have you ever felt like your dream would never come to fruition? I have been thinking about this very topic recently as I have been studying the story of Joseph from Genesis 37-47.  Joseph had two different literal dreams as a young man that his brothers would bow down to him.  These were not just “pizza dreams”; they were prophetic dreams that foretold his destiny that he was to fulfill.  However, his brothers despised him when he shared the dreams, which ultimately landed him in a pit.

Maybe you haven’t had a literal dream as Joseph did of the destiny you are to walk in, but you do have hopes and aspirations to fulfill the purposes God has for your life. If you have accepted the truth that He does have a plan for your life, then I hope that you are actively moving through each stage of this process.

Joseph definitely endured a difficult process.   After telling his brothers about the dream, they schemed to destroy him.  His first stop in the process was a pit where his brothers cast him to die.  Later they decided it would be better if they could make a profit on his demise, so they pulled him out of the pit and sold him as a slave.

Regardless of the bad things that happen to people, when God has a plan for your life, He will make you successful even when others cannot accept His favor on your life. Even though Joseph was sold as a slave, you can read below the passage about his success.

As I stated earlier, the fulfillment of Joseph’s dream was a process. It did not end with this success.  He found himself in a situation where even though he did what was right, he was wrongfully accused and landed in prison for a crime he did not commit.  First, a pit, and now prison, this is where most people give up on the dream, but not Joseph!

What is the dream God has but in your heart? In your natural mind that dream may seem as ridiculous as Joseph’s dream seemed to his brothers.  Perhaps you have experienced your own version of the pit and the prison on your way to the fulfillment of your dream.

The Bible doesn’t tell us about the feelings I am sure Joseph had to deal with during this difficult process. I am sure there were times that he felt so isolated and alone as no one seemed to understand the purpose God had put in his heart.  He had this unusual destiny locked inside of him that could not seem to find a way out.  I suspect that there were times when he questioned the validity of the dream, and wondered if he had misunderstood the message.  Since he seemed to find success wherever he was, even in prison, was he tempted to settle for a modified version of the dream? I wonder if he also struggled to maintain hope for fear of yet another disappointment.

Let me share the part of Joseph’s story that encourages me the most. His situation changed suddenly!  One day Pharaoh was desperate to have a troublesome dream interpreted.  Because Joseph had been faithful to his calling, even when he was in prison, he was recommended for the job.  This single event unlocked his destiny, the path to the Palace, and ultimately the fulfillment of his original dream.  This promotion allowed Joseph to fulfill a mightily calling on his life.  Look below at Joseph’s response when his brothers apologized for their actions.

There may be many obstacles in your path between the dream and the fulfillment of the promise, but I want to encourage you today to let Joseph be an example that gives you hope. The pit and the prison did not prevent the promise; they prepared him to fulfill the calling he was created to do.  If God has given you a dream, stay faithful during the process and you will realize the promise. Today could be the day that suddenly happens for you too!

"He that dwelleth in the secret place of the most High shall abide under the shadow of the Almighty. I will say of the Lord, He is my refuge and my fortress: my God; in him will I trust." Psalm 91:1-2 KJV
Follow Secret Place Revelation on WordPress.com